I am deathly afraid of heights. I’m not exaggerating when I say this is a paralyzing fear. When I was in high school I went to a high adventure camp which included a high ropes course. It did not go well. I got about 15 feet up the 8 inch wide rope ladder which was the first station of the course and I totally frozen and couldn’t move. I had to quit and come back down. Not only could I not finish the course, I didn’t even really start it.

I wasn’t the only one not to finish. Some others didn’t make it past the rope bridge or the climbing wall or even the zip-line. Each one of us who didn’t finish found one or another of the obstacles to be impossible for us to overcome.

In the gospel this Sunday, Jesus holds this conversation with a rich young man. By the end of the conversation Jesus tells the man to sell al his has, give it to the poor, and follow Jesus. The young man can’t do it and went away dejected.

For that man in the story it was his money, his many possessions that were his obstacle to following Jesus. Jesus, with great insight, knew that if he had just asked the man to follow him, that the man would always have this thing that he valued more tugging him back home. Jesus knew that if that young man would really want to follow Jesus, he would need to eliminate that obstacle.

In the decision to follow Jesus Christ, it is likely that we have at least one thing that keeps us from truly, fully following Jesus. Your obstacle that you can’t seem to overcome might be money or security or safety or status. Maybe it is control, pleasure, power, pride or despair. The list could go on.

If you held this same conversation with Jesus what would he have you remove from your life?What is the thing that you hold on to that keeps you from following Jesus more closely?

Don’t worry if this question isn’t easy to answer. The true answer might be hidden from you. Sometimes it’s hard to know ourselves fully. So if you don’t know, what are you going to do to find out?

Once you figure out what this obstacle is, the next step is to remove it? I bet there is a reasonable change that you would struggle to remove it on your own. Maybe even you don’t want to remove it.

The good news of the gospel is that Jesus promises that what is impossible for us to remove from our life God can move easily. What keeps us from Jesus and from heaven, God can remove. All things are possible for God, even when we can’t see a way.

LIVE IT:
Next time you go to Mass, bring with you your obstacle. Think about it during Mass and at some point offer it up to God. Give God the chance to do a miracle and do the impossible.

One of my children’s favorite books when they were little was “Papa, Please Get the 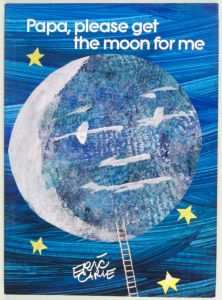 Moon for Me.” It is a beautifully written and illustrated book by Eric Carle. The basic premise is a child asks their father for the moon and he gets it. My children loved this book because they realized that the request was unreasonable and impossible. Yet, they also delighted in the idea that the impossible, just might happen. I liked the book because the dad is a hero.
What is interesting about he book to me is that it speaks to some truth of childhood. Sometimes small children will ask, without irony, for something that is seemingly impossible. When they ask they don’t hesitate. Whether it is a pony, a 2nd trip to Disney the day you get home from the last trip, or a new sibling, little children don’t shy away from asking for something big.
In the gospel, the man with leprosy asks Jesus for something impossible. Yes, he asks Jesus to heal his untreatable disease. But more than that, he asks Jesus to restore his place in society. He asks to be welcomed back into a community from which he was excluded because of his disease.
Jesus’ first miracle isn’t curing the man. Before Jesus removes his leprosy, he reaches out and touches the man. In reality, I bet there was a gasp from the crowd. People may have been shocked that Jesus poke to the man, but that Jesus would touch him was, well, impossible.
The man with leprosy asked for something that no one could do. He asked for the impossible. And Jesus fulfilled that request.
When we pray, what do we ask God for? Often we temper our requests before we even ask. We often ask God for the reasonable and possible. I think we temper our request because we are scared of being let down by God. We are fearful that if we ask big, God won’t pull through and our faith will be shaken. So how do we ask God for a God-sized miracle without risk? We can’t. Asking for the impossible takes a risk on our part.
What we can do is put all of it God’s hands. We can, like the leprous man, ask first that God’s will be done. Just as he says, “If you wish, you can make me clean,” we can say, if it is your will, grant this request Lord. Whatever we ask for, whether it is the moon or something just as impossible, we must do so with God’s will in mind.
LIVE IT:
What is the impossible that you would like to ask God for? A miraculous healing? Healing a broken relationship? Forgiving the unforgiveable? Whatever it is, ask. Ask for that God sized thing. Say something like, “God, I know if you will it, you can……..and in all thing Your will be done!”
Loading Comments...
Comment
×