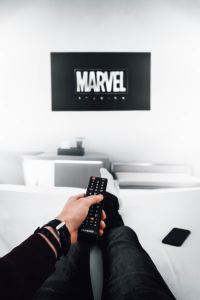 In addition to long walks, running through sprinklers, and late night bonfires, my family has been watching all of the movies in the Marvel Cinematic Universe this summer. Good versus evil, superheroes, mostly quippy dialogue, self-sacrifice – everyone in my family finds something they enjoy in these films.

Last night we watched Avengers. In the middle of an intense battle scene, Captain America jumps between two uneven pieces of the flying Helicarrier. When he lands and then saves the day, both of my daughters snickered. They giggled. And I heard their eyes roll in unison (I’m a dad, I can hear eye rolls).

I asked them why they were snickering and almost in unison they both replied, “Ha, well, that isn’t real.” I ignored for a second the desire for reality while watching a movie about superheroes, interdemensional travel, and Norse gods, and I asked them why they thought it wasn’t real. My older daughter said that it just didn’t look real. Like you could tell it was computer animated. It just didn’t look authentic.

This 2 seconds of video from a 90+ minute movie that is almost entirely unreal was the only time my kids scoffed at how real things looked. When an army of aliens, with 4 thumbs each, attacked New York City, my children didn’t bat an eye.

We aren’t as good as we think we are at recognizing what is real and what is not. Even in our own lives, we can find countless examples of times we perceived something incorrectly or were tricked into seeing something that wasn’t there. This is the whole basis of the TV show Brain Games.

In the gospel this Sunday, Jesus warns against greed. Not only because greed rots the soul and drives us mad with self obsession, but also because greed causes us to care deeply about things that aren’t real. Greed puts value on what isn’t ultimately valuable.

In C.S. Lewis’ work The Great Divorce, when the main character goes to heaven, he finds a place more real than Earth. Heaven is so real that the people who were flesh and blood a mere moment ago are now ghost like. The grass is so hard, so real, that it cuts into people’s now ghost like feet.

All we take for granted as real, we perceive through our senses. We see, hear, taste, and the rest what we consider reality.

Jesus comes to tell us that there is something even more real than what we perceive now. Jesus warns us that if we care too deeply about what we believe to be real now, we will put far too much value on what is truly nothing more than dust. When we value what isn’t valuable, we will miss what is truly real and valuable.

My prayer is that each of us grows rich in what matters to God. May we fall in love with that which is most real.

LIVE IT: Take a screen fast for 24 hours. No TV, no phone for entertainment, shopping, etc., just use it as a phone as necessary. During that time consider praying, asking God to show you what is real.