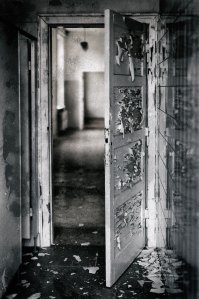 Are you the kind of person who is startled easily? I wish I could say no, but I’d be lying. A number of years ago, a friend of mine hid in a darkened closet to scare me. I opened the door, he harmlessly jumped out from behind a rack of chairs and barely uttered “boo” before I started screaming uncontrollably. I threw the music stand I was holding at him and nearly dropped by lap top. I was terrified. No real injury except for my dignity.

In the gospel the resurrected Jesus comes into the presence of the disciples, and scripture says they were startled and terrified and thought they had seen a ghost. This was after Peter returned from the tomb, and after the two disciples on the road to Emmaus had recounted their experiences of the risen Jesus.

Jesus goes on to inquire as to why they are so afraid. He even goes so far as to ask for something to eat. This thing before them isn’t a ghost, but Jesus, their friend, raised from the dead. Yet the disciples who saw all of Jesus miracles, were still shocked by his resurrection.

How would you react if you encountered the resurrected Jesus? Would you be scared, startled, and spooked? I think how we react to Jesus the living God is directly related to who we think Jesus is and what we expect him to do.

If Jesus is just a good man and a good teacher, then seeing him appear after his death would be a frightening thing. If what we expected out of Jesus is that he would conquer the Romans, then we might just be terrified if he showed up after having been killed by the Romans. If Jesus is only our judge, then we might be a little worried when he appears.

However, if we really believe that Jesus is God and if we believe that Jesus’ purpose was to conquer death and restore humanity’s relationship with God, then I don’t think we will be too worried about encountering the risen Jesus. If Jesus is on our side, and wants us to go to heaven even more than we do, then having him appear in our midst should be a relief for us.

The other thing is this; as humans, we have a natural suspicion of strangers. If we were out to dinner with our family and some stranger sat down at our table, then we would probably be scared or at least a little on edge. Is Jesus a stranger for you? I don’t mean do you know who he is – of course you do. But do you know Jesus, personally? If really, truly encountering Jesus would be shocking and terrifying, I think it’s time to think about whether you know Jesus and why you think he wants to be near to you.

Live It:
Invite Jesus into life. Whether it is at the end of the night before you go to bed or in the middle of Mass on Sunday, say a little prayer inviting Jesus into your heart and into your life. That way Jesus won’t be a stranger.