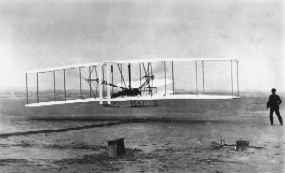 Can you imagine what it must have been like to see the first airplane fly? We’ve become so accustomed to the idea of powered human flight that we don’t bat an eye about hopping on a metal tube and hopping off 1300 miles away. Most of us probably worry more about going through security at the airport than whether this 735,000 lbs beast of a machine is actually going to lift off.

Can you imagine being one of the witnesses at Kitty Hawk, NC while the Wright brothers flew for the first time? I bet someone said, “If I hadn’t been there and seen it with my own eyes, I wouldn’t have believed it was real.” The Wright brothers short flight opened up a new way to travel for everyone, forever. Only 66 short years later, a human being walked on the moon. The first powered flight was 120 feet; less than a century later we traveled 238,900 miles to the moon. Amazing.

In our gospel, we hear about the disciples witnessing the resurrection of Jesus Christ. At first they are so overwhelmed they don’t believe it. Their friend and leader whom they watched die and be buried, suddenly stood before them. They had seen Jesus raise others from the dead during his ministry, but this was different and they knew it.

It was so inconceivable that a dead man was alive, they couldn’t believe it until Jesus invited them to touch him and then he ate. He wasn’t some ghost, but was alive again.

Jesus was the first to rise from the dead, to live in his resurrected body. By Jesus’ death and resurrection, he completed changed human existence. When Jesus rises, he forever transforms what it means to die. Jesus conquers death for everyone, forever. And the disciples are there to witness it firsthand.

I can tell you the disciples certainly believed it; they knew it was real. Most of them spent their whole lives telling others about it and were killed because of what they taught.

So, do you believe it is real? And if you do, what does it mean for you life? If Jesus really did change everything, what changes in us?

Live It:
Mark 9:24 has a simple prayer prayed by a dad who desperately needed to believe that Jesus could change everything forever. Say this prayer this weekend; look for how Jesus is real in your life.

“I do believe, help my unbelief!”